Surprises are in store for Affordable and Liveable property!

The PRD Affordable and Liveable Property Guides 2nd Half 2018 have just been released for Sydney, Melbourne, Brisbane, and Hobart. The reports provide valuable insight and highlights for the market, reporting on many key indicators, creating a holistic picture of property conditions in each capital city.

There were several surprises in the 2nd half of 2018 report, including:

It is important to note that these premium percentages are affected by median price movements in the market, and that unit markets in Sydney, Melbourne, and Brisbane have experienced an annual softening. If only based on house premium percentage, Melbourne becomes the most expensive city to live in, followed by Hobart. This is quite surprising as for several years Melbourne has been nominated as one of the most liveable cities in the world.

First home buyer activity continues to be a focal point in the 2018 property market. Table 2 confirms declining affordability over the past 12 months, particularly in Melbourne and Hobart, with drastic reductions in access to the first and lowest price band within each market. In Melbourne, access to the under $500K market shrunk significantly from 11.2% to 1.4%, whereas in Hobart access to the under $350K market declined from 28.6% to 8.2% in the 1st half of 2018.

The premium market, above the $2M price tag, has decreased in sales activity in Brisbane Sydney and Melbourne, with the price bracket completely vanishing in Brisbane. Interestingly the highest premium market for Hobart, $800K+, has tripled from 3.6% to 10.2% over the past 12 months. This suggests that there may be a concentrated shift in buyer activities across capital cities, creating more affordability in Brisbane, Sydney and Melbourne, and causing price hikes in Hobart. Although this has been an occurring pattern over the past 12 months now we are seeing the definite results of this activity. Hobart is the only capital city in which the percentage premium added to its affordable and liveable suburbs had to be above what was added to reach the Hobart median price, thus, now is the time to strategically re-think development in Hobart and its surrounding areas. 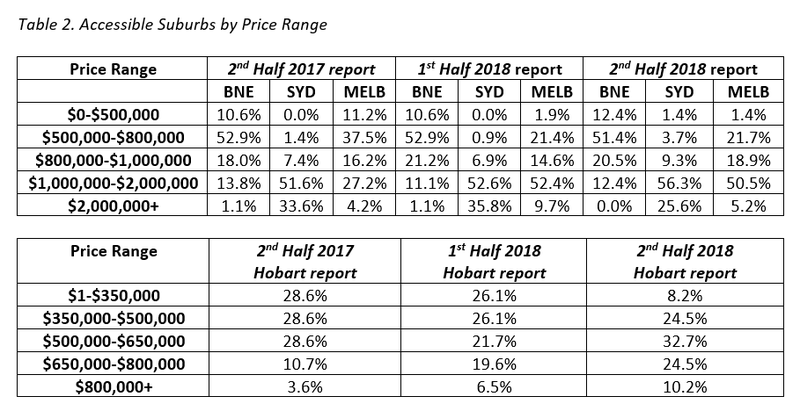 The PRD Affordable and Liveable Property Guides 2nd Half 2018 aim to identify affordable and liveable suburbs within 20km from each capital city’s CBD.

Table 3 highlights in general that Sydney has the highest entry price yet the lowest rental yield. In saying that, the Sydney house rental yield is comparable to that of Melbourne, potentially due to a softening in Sydney median house prices. This is good news for investors, given the past 24 months house rental yields in Sydney have been one of the lowest across all capital cities.

In the 1st half of 2018 Hobart provided the lowest entry price with the highest rental yield; however, this is no longer the case. Whilst it might be true for houses, both Brisbane and Hobart compete for the title of most affordable, with the highest rental yield for units. This is due to the softening in the Brisbane unit market, as well as the upswing in the Hobart unit market.