In this research release PRD National Research Manager Dr Diaswati Mardiasmo presents key insights into the current Gold Coast property market and the Commonwealth Games 2018. Dr Mardiasmo has been tracking the impact of major sporting events on their host cities since 2015.

As the Gold Coast waits with bated breath for the start of the most anticipated international sporting game it has ever hosted, keen property watchers are increasingly wondering what will happen to the Gold Coast property market once the Commonwealth Games 2018 has concluded.

At present, the Gold Coast property market is showing healthy signs of price growth, with houses recording a 6.9% growth and units recording a 4.2% growth over the past 12 months (2016 to 2017). There has also been a 2.5% growth in the number of units sold during this period. This growth combined with positive price changes suggest real capital growth in the market.

These findings should comfort those who might be wary of a unit oversupply in the Gold Coast in general. What’s more, the average days on market for both houses and units have decreased, suggesting there is more competition in the market, even before the Commonwealth Games, and that buyers need to secure properties now.


The question of 'what will happen after the Commonwealth Games' is a focal point to property buyers and investors, particularly concerns around the post-Games period and the market potentially seeing a cooling down.

The Games will primarily take place in the suburbs of Ashmore, Broadbeach, Broadbeach Waters, Carrara, Coomera, Oxenford, Runaway Bay, and Southport. At present the suburbs set to feel the most impact are Carrara, Oxenford, and Southport, with these suburbs already recording annual house price growth that surpasses the Gold Coast Local Government Area (LGA), at 9.2%, 8.2%, and 8.5% respectively. Coomera has become a stand out suburb for unit investment, with an annual price growth of 11.3%. What’s more, transaction growth in most of the affected suburbs have declined over the past 12 months, suggesting an undersupplied market.


Anecdotal evidence of how hosting an international games can have a positive influence on the market, as well as how the Commonwealth Games 2018 is already having a positive impact in the Gold Coast market, is in abundance. Examples include:

Based on the Sydney Olympic Games 2000, Commonwealth Games 2006, and observations of on-the- ground real estate agents; it is expected that the Commonwealth Games 2018 will have an impressive impact on the Gold Coast market. The below graph (green line) reflects the market forecast for the Gold Coast, corrected to accommodate current stringent laws on international buyer loans and changes in policies related to home buying since 2002 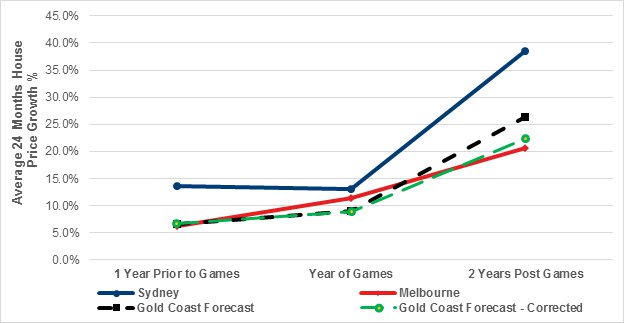 Should the market continue to go the same direction that it is going now, more owners, investors, and university students will come to the Gold Coast post-Commonwealth Games. Now is the time to get into the market and capitalize on higher levels of affordability.