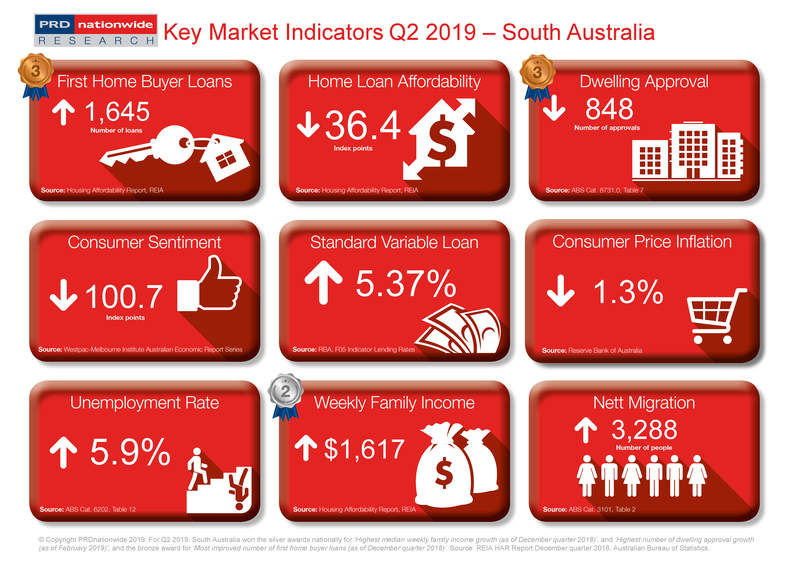 Nett migration in SA has increased by a significant 45.0% over the past 12 months (to September 2018), which is the second highest level of nett migration growth across all states. This represents an extra 3,288 people residing in the state, and with increasing population there is naturally an increase in property demand. Interestingly however, dwelling approvals in SA have declined by -14.2% over the past 12 months (to February 2019), due to the declining trend across most states. This has earned SA a bronze award nationally for the highest growth of dwelling approvals. This mismatch between the state’s population increase and dwelling approval decrease, suggests high potential for current stock to be absorbed, but also signals a potential undersupply in the near future. Now is the time for astute developers to investigate SA for their next opportunity.

SA achieved a silver award nationally for highest growth in median weekly family income, increasing by 2.7% over the past 12 months (to the December quarter of 2018), to $1,617.  Although in dollar terms this is still lower than the Australian average of $1,765 per week, wage growth in SA has shown to be slightly faster than the Australian average (2.6% over the same period). This may explain why there is first home buyer growth, despite a decline in home loan affordability. As a result, those in the workforce should have a higher disposable income. This has a positive multiplier effect into the economy, as those working have the potential to spend more on goods and services. This creates a steady platform for future economic growth in SA.

The ‘PRD Q2 2019 Key Market Indicators’ provide a quick snapshot of the current state of the market in Australia from both an economic and property perspective. The Indicators cover both national and state level data, comprising of: