The Australian Capital Territory (ACT) continued to demonstrate strong economic fundamentals in the PRDnationwide Q3 2019 Key Market Indicator Awards, earning gold awards nationally in the lowest unemployment rate and most improved unemployment rate categories. The results indicate a higher number of people with disposable incomes, which from a property perspective suggests a potential increase in the number of home buyers and investors.

Surprisingly, despite having the second highest home loan affordability index reading, the ACT recorded a -43.0% decline in the number of loans to first home buyers in the 12 months to the March quarter of 2019, with only 392 loans. Home lending requirements have been tough on first home buyers of late, which may explain the decline in the number of loans. However, it is also possible that first home buyers are being priced out by local and interstate investors, or that there is not enough stock; given that the number of dwelling approvals declined by -41.9% in the 12 months to June 2019. This decrease in dwelling approvals follows the previous -35.8% decline in the 12 months to February 2019, suggesting there is a golden opportunity for developers seeking their next project.The home loan affordability index for the ACT dropped by -3.0% to 49.3 index points in the 12 months to the March quarter of 2019. This pattern is in contrast with the Australian average, which increased by 3.4% over the same period. Despite this, the ACT rating was significantly higher than the Australian average home loan affordability reading of 33.0 index points, earning it a silver award nationally in the highest home loan affordability index reading category. This was no surprise, as median property prices in the ACT are still below the greater Sydney area, and the median weekly family income in the March quarter 2019 was $2,741; the highest in the nation. 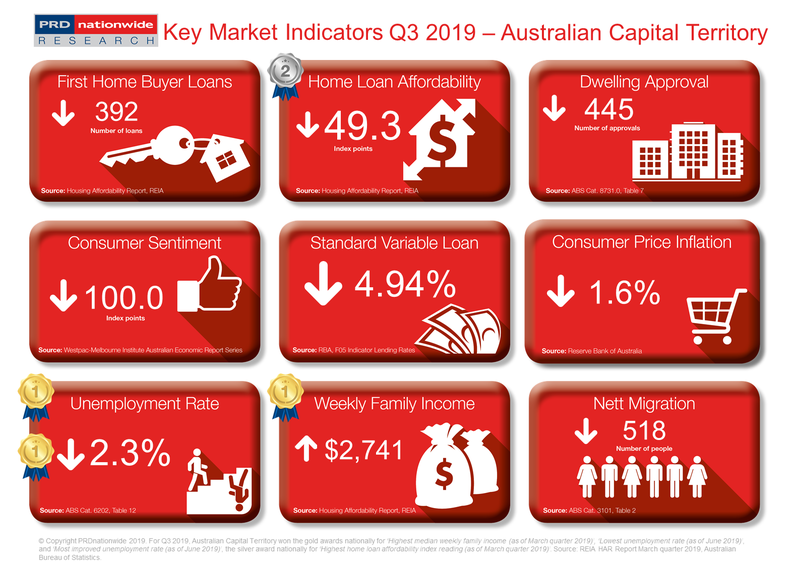 The PRDnationwide Q3 2019 Key Market Indicators provides a quick snapshot of the current state of the market in Australia from both an economic and property perspective. The Indicators cover both national and state level data, comprising of: