Northern Territory is the most affordable state in Australia 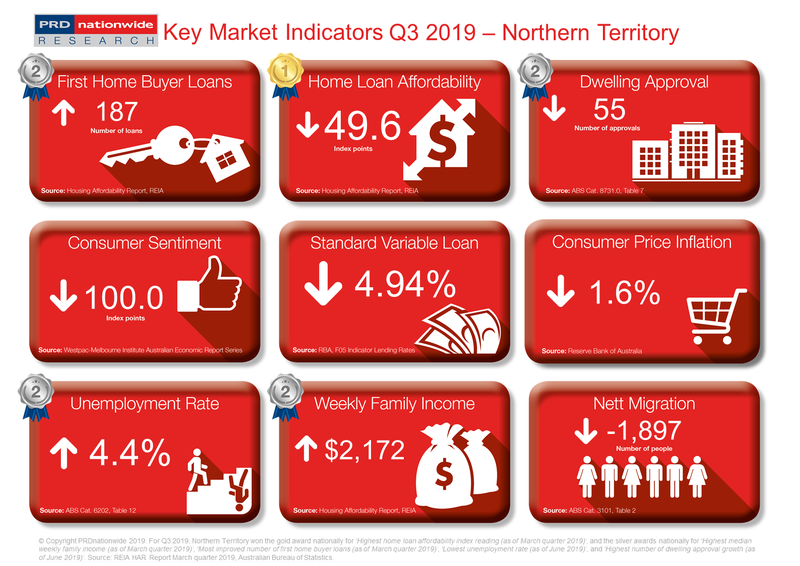 Not surprisingly, the number of first home buyers in the NT has increased by 12.7% in the 12 months to the March quarter of 2019. This contrasts with the -11.6% decline in the Australian average, which earned the NT a silver award nationally in the most improved number of first home buyer loans category. Similar to the home loan affordability index pattern, this is the second time in the PRD 2019 Key Market Indicator Series that the NT recorded a contrasting pattern to the Australian average. In the 12 months to the December quarter of 2018, the NT recorded an increase of 24.3%, while the Australian average declined by -5.8%.

The NT has demonstrated strong economic fundamentals for the rest of 2019, earning silver awards nationally in the lowest unemployment rate and highest median weekly family income growth categories. The unemployment rate in the NT was 4.4% in June 2019, which although increased by 1.6% in the past 12 months, is still a much lower rate than the Australian average of 5.2%. The median weekly family income was $2,172 in the March quarter of 2019, representing a 2.5% increase in the past 12 months (in line with the Australian average increase of 2.7%). From a property perspective, this suggests a potential increase in the number of home buyers and investors.

The PRD Q3 2019 Key Market Indicators provide a quick snapshot of the current state of the market in Australia from both an economic and property perspective. The Indicators cover both national and state level data, comprising of: