Home loan affordability improved by 5.1% in the 12 months to the March quarter of 2019 to 30.8 index points. This is higher than the Australian average increase of 3.4%, which will benefit local VIC buyers. Not surprisingly, VIC recorded the highest number of first home buyer loans at 7,199 in the March quarter of 2019. Although this represented a decline of -11.9% in the past 12 months, it is on par with the Australian average decline of -11.6%. This suggests that the decline in first home buyer loans may not specifically be due to local market conditions, but rather, as a result of a larger national phenomena in response to tighter home mortgage lending criteria, and other political and economic uncertainties. 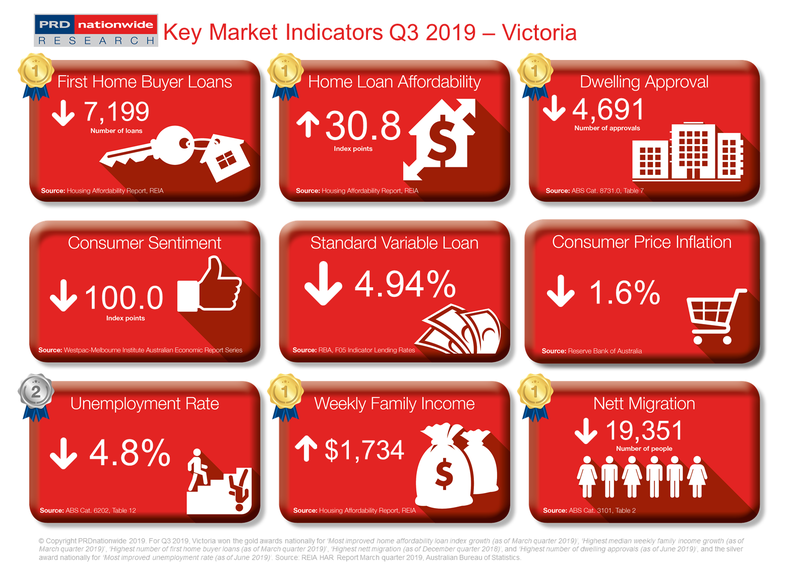 Strong economic fundamentals exist in VIC, with its unemployment rate declining by -12.7% in the 12 months to June 2019. This is significantly above the Australian average shift of -1.9%, earning VIC a silver award nationally in the most improved unemployment rate category. Furthermore, the weekly median family income grew by 3.0% in the 12 months to the March quarter of 2019, slightly above the Australian average of 2.7%.

The PRD Q3 2019 Key Market Indicators provide a quick snapshot of the current state of the market in Australia from both an economic and property perspective. The Indicators cover both national and state level data, comprising of: