Queensland’s (QLD) top achievement this quarter was winning the silver award nationally for highest median weekly family income growth at 2.5% in the 12 months to June quarter 2018. QLD can boast a superior wage growth this quarter, which many states would be envious of in the current low wage growth environment. 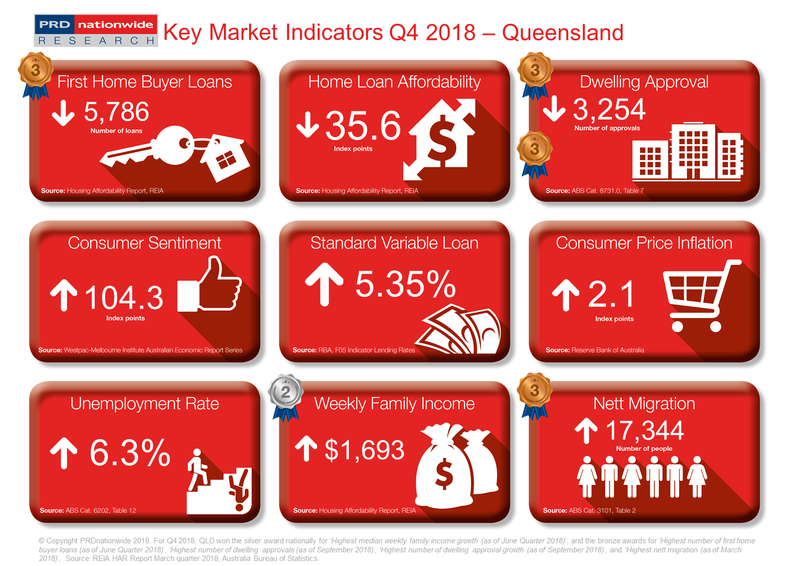 Nett migration remained strong in QLD, ensuring it received a bronze award nationally for highest nett migration (as of March 2018), gaining 17,344 people in the period. A combination of solid performance in both nett migration and dwelling approvals position the QLD economy as a top performer for continued steady growth into the future.

The number of first home buyers in QLD secured the state its final bronze award nationally for the highest number of first home buyer loans (as of June quarter 2018), with 5,786 loans issued in the period. Interestingly, this represented a decline of -3.6% when compared to the June 2017 quarter. This suggests there is already a degree of price equality existing within the market, meaning first home buyers are not too discouraged by current property market conditions, while also not being encouraged by any major price falls or economic policies. The effect on first home buyers of the reduction in the value of the Great Start Grant from $20,000 to $15,000 remains to be seen, and should be clearer in the next quarter’s results.

The PRD Q4 2018 Key Market Indicators provide a quick snapshot of the current state of the market in Australia from both an economic and property perspective. The Indicators cover both national and state level data, comprising of: