Victoria Will Be Strong For The Rest Of 2019

Victoria (VIC) leads the nation for first home buyers, achieving a gold award nationally for the highest number of first home buyer loans in the ‘PRDnationwide Q2 2019 Key Market Indicator Awards’, with 8,855 loans approved between the December quarters of 2017-2018. Interestingly, this represented a decline of -10.5% during the timeframe, however much of this is attributed to increasing prices in Melbourne and its immediate inner areas, as well as tighter home mortgage lending policies introduced by banks in the 2nd half of 2018. 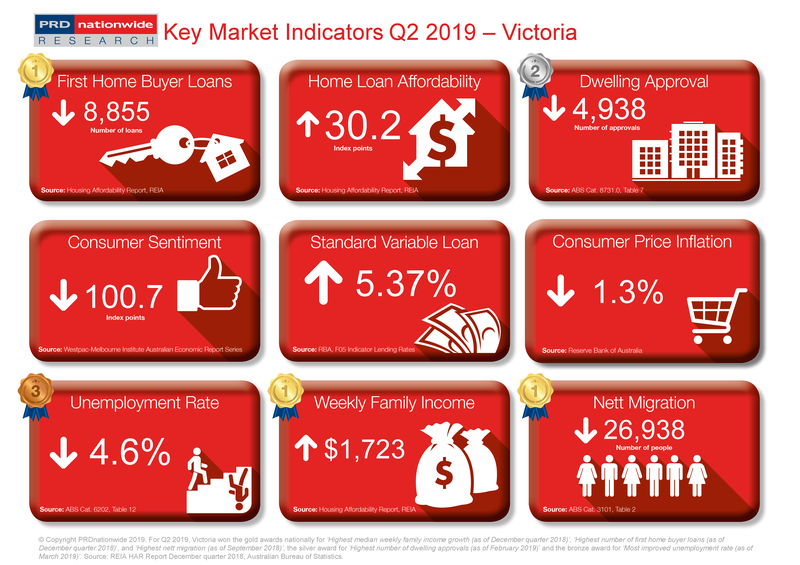 VIC home loan affordability index grew by 1.0% between the December quarters of 2017-2018, which was on par with the Australian average of 1.3%. This brings VIC’s home loan affordability index to 30.2 points, which is higher than New South Wales’ at 27.2 index points. This should stimulate first home buyer activity in early 2019 and provide an improved number of first home buyer loans in the next 6 months.

Many are choosing to move to VIC to work, live, and play, which is evident by the extra 26,938 people calling the state home (as per September 2018). This has earned VIC a gold award nationally for highest nett migration. An increase in population comes a higher demand for property, however dwelling approvals in VIC have declined by a significant -24.6% over the past 12 months (to February 2019). This allows for current stock to be absorbed, particularly those in Melbourne, however it also creates an opportunity for developers wanting to create niche product offerings.

VIC recorded a -11.5% decline in unemployment rate between March 2018-2019, to 4.6%, earning it a bronze award nationally for most improved unemployment rate. Furthermore, VIC achieved a gold medal award nationally for highest growth in median weekly family income, increasing by 2.9% over the past 12 months (to the December quarter of 2018), to $1,765.  In dollar terms this is on par with the Australian average of $1,765 per week, however wage growth in VIC has been faster than the Australian average (2.6% over the same period). The combination of these two key indicators will have a positive multiplier effect in the VIC economy, as those working have the potential to spend more on goods and services. This creates a strong platform for future economic growth in VIC.

The ‘PRDnationwide Q2 2019 Key Market Indicators’ provide a quick snapshot of the current state of the market in Australia from both an economic and property perspective. The Indicators cover both national and state level data, comprising of: