Airlie Beach Hotel Up For Sale

Airlie Beach Hotel up for sale - Brisbane, 21 March 2017 – The Airlie Beach Hotel is to be offered for sale for the first time in over 30 years via an International Expressions of Interest campaign. CBRE Hotels’ agents Wayne Bunz, Paul Fraser and Hayley Manvell in conjunction with PRD Airlie Beach Agent Christie Leet, have been appointed to manage the sale on behalf of the owner, the O’Neill family.

The hotel is within the Airlie Beach CBD and has three major street frontages including to both Airlie Esplanade and the main street, providing strong foot traffic and presence.

“The Airlie Beach Hotel is situated on a significant 8,819sqm waterfront site, in what is arguably the best location in the Airlie Beach CBD, with never to be built out views across to the Whitsunday Islands,” Mr Bunz said.

“This is a quality hotel which has been well maintained by the family with constant capital expenditure totalling approximately $3.5 million over the past five years.”

Mr Bunz said the sale offered prospective purchasers a strong cash flow business and intrinsic underlying value given the size of the land holding, with the ability to substantially increase the property’s EBITDA.

“Through reconfiguring the existing uses, an operator could also increase passive income by increasing the retail floor plate (STCA), and through additional leasing.”

Ms Manvell added; “There is also scope for additional accommodation rooms to be added by utilising the main infrastructure already in place, with the possibility of staging the works so that holding income continues during construction (STCA). Another opportunity could involve redeveloping the additional land adjoining the site, which is currently utilised as a car park (STCA).

She also noted that with the hotel being owner operated at present, the sale could present rebranding opportunities, particularly given the lack of major international hotel brands in the region.

An incoming owner could also strata-title the complex into different components and sell them down individually.

PRD agent Christie Leet described the property as one of the most strategic land holdings on the Whitsunday coast.

“A site of this size cannot be replicated on Airlie Beach’s Main Street, where over 60% of properties are already strata titled,” Mr Leet said.

“It is being offered at a time when the region’s tourism sector is the strongest it has ever been, with an additional 110,000 airline seats to Airlie Beach this quarter on the back of being recognised as Australia’s fastest growing regional airport”. Figures released from TRA, show that total visitations to the area are up 20% Year Ending September 2016.

The strength of the market was confirmed by Tourism Whitsundays CEO Craig Turner, who said Airlie Beach is in a strong growth cycle and with the increased flights, is placed extremely well for the short to medium term”.

Research from STR highlights that the Whitsundays’ saw a double-digit growth in RevPAR up 13.2% in the 12 months to December 2016, market occupancy increased by 6.1% to 83.8% whilst room rates increased by 7.1% to $423.60. The low Australian Dollar and increased air capacity is expected to continue to fuel both domestic and inbound international tourism.

CBRE Group, Inc. (NYSE:CBG), a Fortune 500 and S&P 500 company headquartered in Los Angeles, is the world’s largest commercial real estate services and investment firm (in terms of 2015 revenue).  The Company has more than 70,000 employees (excluding affiliates), and serves real estate owners, investors and occupiers through more than 400 offices 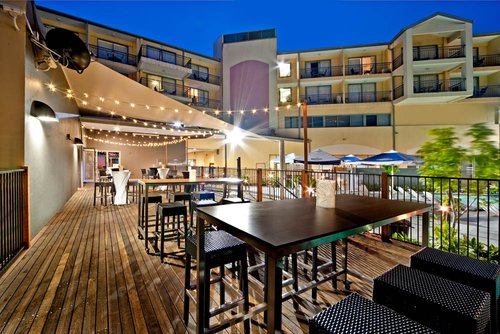