Build for a Cure charity - The Home Built With Love

The ‘Home Built With Love’, which was publicly unveiled in Medowie’s Bower Estate last month is a home built on hard work, generosity and community spirit. The project is an important part of the Build for a Cure charity, which in collaboration with the Children’s Cancer Institute and the John Hunter Children’s Hospital, helps to raise funds for vital research into childhood cancer. Each $100,000 raised by these types of project funds a researcher for a full year, and so far the campaign has raised more than $2 million for the Children’s Cancer Institute.

The project involved the generous donation of resources from a range of local businesses, including the McCloy Group that donated the 701m2 plot of land and McDonald Jones Homes that donated the home. Approximately $80,000 worth of furniture and décor was also donated by Winning Appliances, Fisher and Paykel and Freedom, and everything from the masterful build and interior design to the garden landscaping is of the highest standard.
In terms of PRDnationwide charities, PRDnationwide Nelson Bay in conjunction with PRDnationwide Newcastle and Lake Macquarie have also been proud supporters of this amazing project in terms of organising all of the real estate marketing and managing the auction on the day.

The community came together for the build from local hospitality workers to over 100 tradies and collectively volunteered hundreds of hours of their precious time. Fourteen carpenters for example worked to erect the frame in a single day, and after the initial foundation slab was laid, everything else was completed within just nine days. And as the house came together, so did the local community, including the team here at PRDnationwide Port Stephens. 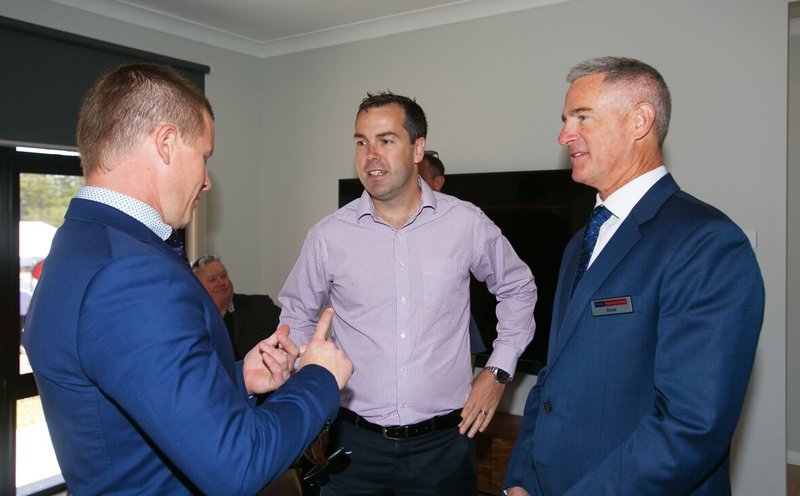 As celebrity tradie Scott Cam who was there for the reveal said, “It’s not every day you see an entire house built in just 21 days. It’s remarkable to see the hundreds of volunteers that worked together to make this happen”.

The home is located in a 127-hectare residential community that was first launched by the McCloy Group in 2016. Located on the western side of the semi-rural town of Medowie, it adjoins the Medowie State Conservation Area.

Its central location will allow its eventual owners to make the most of both urban and coastal attractions with Newcastle a 25 minute drive away and the pristine waterways and beaches of beautiful Port Stephens a mere 15 minutes away.

The estate also benefits from a close proximity to local amenities and shopping facilities, including childcare centres, schools, supermarkets and the Pacific Dunes Golf Course. There is also a 1-hectare park and playground located nearby, which features netball hoops, basketball towers and a range entertaining play equipment for the kids.

The front half of the house features an open plan layout that’s been carefully crafted for both family time and entertaining, and this part of the house also features a gourmet kitchen with an island bench and walk-in pantry. An alfresco cabana for summer dining and a home theatre for weekend family movie nights completes this open plan space.

The rear of the home hosts three bedrooms that are joined by a long hallway, and the master suite is the perfect parent’s retreat with its built-in robes, a refined ensuite and access to the outside cabana with its beautiful views of the Medowie State Conservation Area. Ducted air conditioning, a double garage, secured landscaped gardens and plenty of storage further adds to the appeal of this magnificent home.

This very special ‘House Built with Love’ will be auctioned on October 21, with all proceeds from the sale going towards the Children’s Cancer Institute’s vital research.