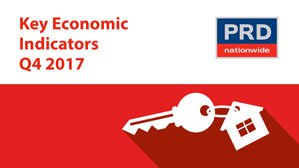 The Northern Territory leads the way with 8.6% improved affordability

The Northern Territory (NT) has been leading home loan affordability growth over the past 12 months (to June 2017), at 8.6% (49.2 index points), while the once affordable South Australia becomes more unaffordable. Tasmania had the largest decrease in first home buyer loans across the country, down by 17.6% over the past 12 months.

Consumer sentiment made a brief appearance in the positive range in October 2017, at 101.4 index points

Consumer sentiment is a key indicator of the general population’s confidence in the economy, whereby a higher index point reading suggests consumers are more willing to spend rather than save. Consumer sentiment made a brief appearance in the positive range in October 2017, at 101.4 index points. However, this has dipped to below positive levels again in November 2017 (to 99.7 index points). Although this is not the lowest point for consumer sentiment in 2017, it is a 1.5% decrease over the past 12 months.

The standard variable loan remained stable at 5.2% and consumer price inflation decreased to 1.8 index points this quarter, meaning that there should be more household income available to families. This should assist in building consumer confidence over the next few months.

Weekly median income has increased in all states

Combined with a declining unemployment rate across most states (with the exceptions of Queensland and the Northern Territory) this should result in an increase in disposable household income. Good news for any industry that relies upon the society’s propensity to consume/buy goods and services.

Affordability for all, in particular first home buyers, continues to be a hot topic and a key concern

Affordability for all, in particular first home buyers, continues to be a hot topic and a key concern. Over the past 12 months the Australian Home Loan Affordability Indicator has decreased by 0.9%, to 31.8 index points. Interestingly, Tasmania (once hailed to be one of the most affordable states in the country), has had a decrease in affordability – by 0.5% to 41.9 index points. This is further confirmed by a decrease of 17.6% in first home buyer loans, the largest decrease among all states.

What are PRD’s Key Economic Indicators?

The PRD Q4 2017 Key Economic Indicators provide consumers with a quick snapshot of the current state of affairs from an economic and property perspective.

The PRD Key Economic Indicators cover both national and state-level data, comprising of: