PRD — Real Estate News — From the Desk of the Chief Economist COVID-19: Why you should invest in property now
Share this page

From the Desk of the Chief Economist COVID-19: Why you should invest in property now

COVID-19 has taken us all by surprise, its power weakening our economy in a rapid manner over the past 3 months. So much so that the Reserve Bank of Australia (RBA), who were positive in their projection based on property market data and held the cash rate stable in February 2020, cut the cash rate in March 2020.

“It is not surprising that there is the probability of investors moving their rental property from short-term to the long-term market, yet the fear of oversupply and a weaker rental market exists, especially for capital cities with high and/or increasing vacancy rates.

The question is – are investors moving stock? If so, to what extent? And how will it impact the rental market?” – asked  Associate Professor Artemis Chang, QUT Business School

Airbnb data for Sydney and Melbourne since December 2019 has shown interesting trends for duplicate and unique listings, for those that offer “whole house” only. Duplicate listings refer to specific listing ID (identification) number assigned to a property that is found in the next month – for example an listing ID is found in both January 2020 and February 2020 Airbnb data.

This suggests that properties from previous months are still actively listed on Airbnb and have not been moved to the long-term rental market. It potentially shows that Airbnb owners are waiting longer for their properties to be rented.

Melbourne is showing the same trend as Sydney in regards to duplicate and unique listings. Not surprisingly unique listings between December 2019 – February 2020 have declined. This suggests that new investors are wary of adding to the Airbnb market, however old/current investors are remaining put. 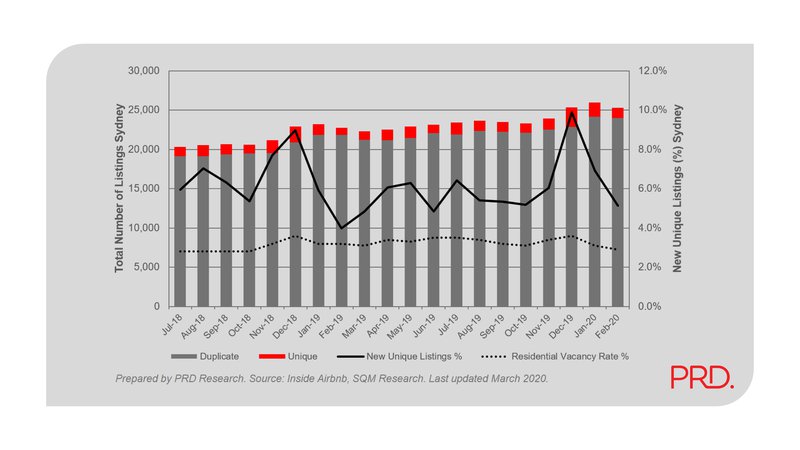 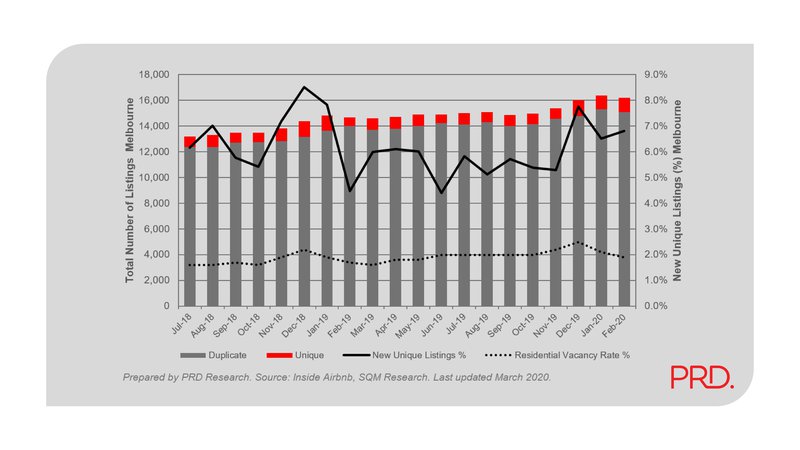 2. Vacancy rates in both Sydney and Melbourne continue to decline. In December 2019 vacance rates for Sydney and Melbourne were at 3.6% and 2.5% respectively, in February 2020 they were at 2.9% and 1.9% respectively. These figures are both under the Real Estate Institute of Australia’s (REIA) healthy benchmark of 3.0%, and a declining trend suggests healthier rental demand.

At present, data shows that investor confidence in capital cities should not waver as there is a healthier vacancy rate in both Sydney and Melbourne. Despite the decline in unique listings in the short-term rental market, which may suggest the property has been added to the long-term market instead, there does not seem to be any severe effects on the long-term market.

A multipler effect of COVID-19 is that many tourists have decided to delay or cancel holiday plans, which may impact the short-term rental market in tourist heavy areas such as: Gold Coast, Sunshine Coast, Bondi Beach, Byron Bay, and the Whitsundays / Airlie Beach.

As Airbnb data is not available for these areas, we have looked at the long-term rental market instead, to evaluate whether there has been an unprecendented changes. 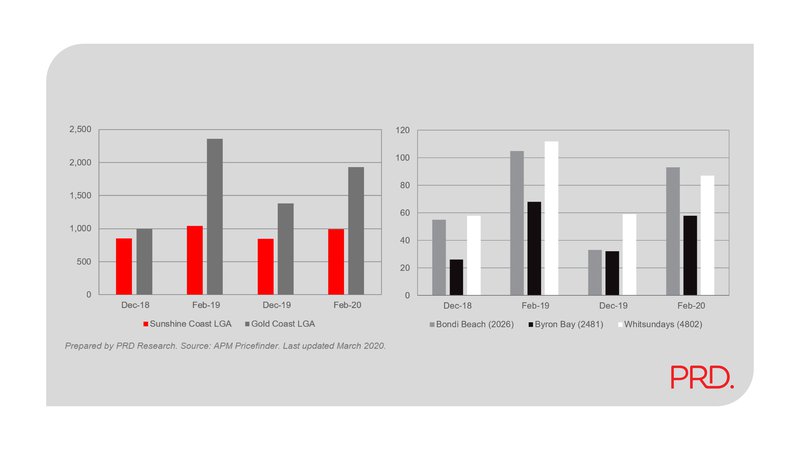 4. February 2020 vacancy rates in all tourist focused areas are classified healthy, under the Real Estate Institute Australia’s benchmark of 3.0%. In fact for some areas such as Sunshine Coast and Whitsundays it is at a much healthier rate. 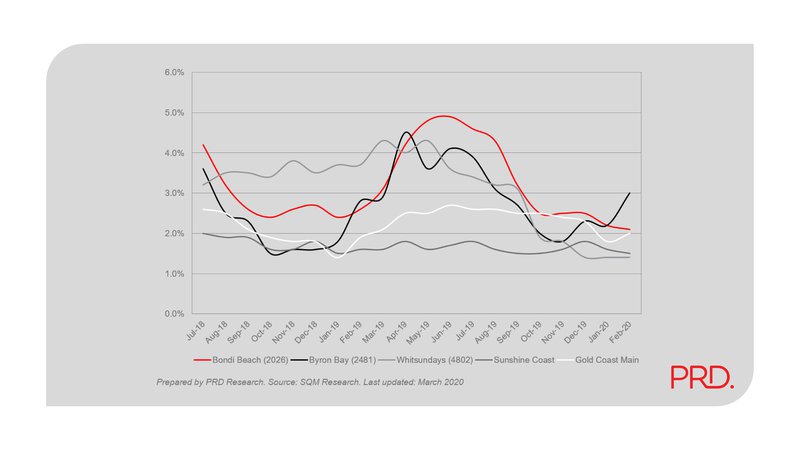 Overall the long-term rental market in tourist destinations are not showing an unpredented increase, that will put pressure on vacancy rates. There is evidence of a slowdown in the number of rental properties being added to the market, in comparison to December 2018 – February 2019, which is reflective of current COVID-19 induced conditions. On the other hand this also means that there is no added pressure to the long-term rental market, and given healthy vacancy rates conditions, build investor confidence.

COVID-19, and its power to weaken an economy, has taken us all by surprise. Everyday we hear about an event being cancelled, more restrictions on gatherings / public places, and the stock market falling.

The property market will see a slowdown, as many who are uncertain of their income may withhold from entering the market. There is a delicate balance between the sales and rental market, as those who choose not to buy may remain in the rental market, benefiting investors. However, at the same time there will also be investors who must sit tight, as their particular property was to be occupied by international students. Data suggest there is a faith in the property market, as vacancy rates in capital cities such as Sydney and Melbourne have declined over the past 3 months to February 2020. Tourist destinations vary – in places that do not rely mostly on tourists such as Bondi, Gold Coast, and Sunshine Coast vacancy rates declined however in areas that do such as Byron Bay and the Whitsundays / Airlie Beach it increased.

Amidst all this, most importantly, we need to be calm. The Reserve Bank of Australia maintains its outlook that the Australian economy will see a growth pick up over the next two years, and that there will be a quick recovery post-COVID 19.