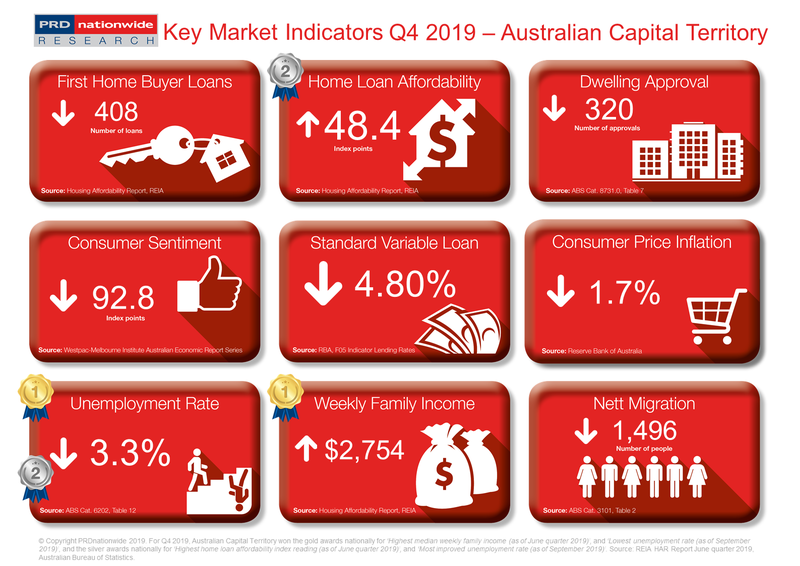 Furthermore, ACT earned the gold award nationally in the Highest Weekly Median Family Income category with an income of $2,754 in the June quarter of 2019. This is a 2.4% increase in the past 12 months, which is slightly lower than the Australian average increase of 2.6%. That said, given that the unemployment rate decreased in the ACT (in contrast to the Australian average which increased), this provides the state with strong economic fundamentals for the remainder of 2019 and into 2020.

The ACT earned a silver award nationally for the Highest Home Loan Affordability Index Reading, of 48.4 points in the June quarter of 2019. This suggests that although home loan affordability only improved by 1.0% in the past 12 months (lower than the Australian average growth of 3.5%), the ACT remains one of the most affordable regions in the country. Interestingly, the number of first home buyer loans declined by -24.2% in the 12 months to the June quarter of 2019. It is possible that due to the commercialisation of the ACT and its affordable property market, local first home buyers are having to compete with more local and interstate investors. Dwelling approvals declined by -50.2% in the 12 months to September 2019, which may intensify market competition. This presents developers with the perfect opportunity to create niche offerings and increase housing supply.