The PRD Affordable and Liveable Property Guides 2nd Half 2019 are available for Sydney, Melbourne, Brisbane, Adelaide, Canberra, Perth and Hobart. These guides provide valuable insights and highlights of the market and report on many key indicators to create a holistic picture of property conditions in each capital city.

There were several surprise findings in the 2nd Half 2019 report:

The cost of liveability is the highest in Perth, as a high premium percentage had to be added to the state average home loan3 for both houses and units. This was significantly higher than the required premium percentage to reach Perth Metro’s median price. Table 1 also highlights the difficulty in finding unit suburbs which satisfy both affordable and liveable criteria, with premiums higher than capital city median prices added. In terms of premium difference, Melbourne has the most affordable liveability which is good news for residents. From the perspective of the average premium percentage added to find affordable and liveable suburbs, Adelaide is the least expensive (30%), while Hobart is the most expensive (108%).

It is important to note that these premium percentages are affected by two key variables: median price movements in the market, and the ability of a suburb to meet the liveable criteria. For example, in Hobart, Perth, Adelaide and Canberra, the premium percentages added (to the respective state average home loan3) were higher than the required premium percentages to reach each of the capital city’s median prices. This is interesting, particularly for Hobart and Adelaide, as they are historically known as affordable capital cities. This points to an urgent need to address infrastructure and commercial activity in the area, to increase liveable aspects for residents. 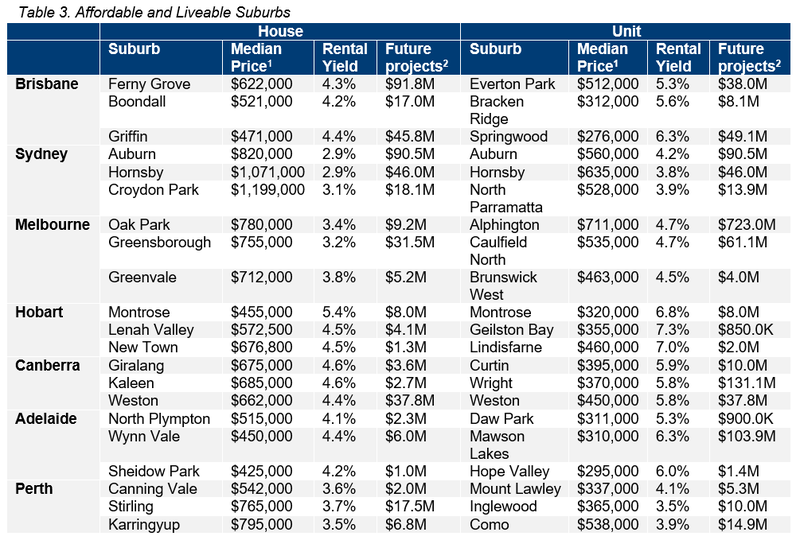 After looking at the affordable and liveable suburbs identified in Table 3, it is evident that in general, Sydney and Melbourne have the highest entry prices, yet the lowest rental yields. This is a similar pattern to the 1st Half 2019¥ report, despite a market cooling. Hobart median prices are now on par with Brisbane, which suggests affordability has declined in Hobart. The most affordable capital city is Adelaide, giving home buyers and investors most “bang for buck”, due to it having the lowest median prices and highest rental yield. It is no wonder that South Australia (SA) was the only state to have recorded positive growth in first home buyer3 loans in the 12 months to Q2 2019.

Each report focuses on suburbs within a 20km radius of the CBD (or 10km for Hobart and Canberra), taking into consideration the following criteria:

View all the Affordable and Liveable Property Guides 2nd Half 2019